skip to main | skip to sidebar

On the morning of the 16th we got up around 4:15AM to get ready for the early morning train to Jaipur, on the famous Shatabdi Express. The drive to the station was smooth almost all the way and our taxi-wallah brought us to the station via Chelmsford Road Entrance with time to spare. Due to the traffic jam around the station entrance, we all got off in the middle of the road and walked into the station dragging our luggage! The journey of 4 hours started auspiciously on time from Platform 2, with the train stopping at Patel Nagar, Delhi Cantt, and Gurgoan stations, to pick up passengers on the way. We victualed on  two rounds of breakfast comprised cereal with milk, cookies, idlis, upma, sambar and rounding it off with tea. Food was clean and the service very professional. The overall journey, although very comfortable, was not otherwise noteworthy.

We arrived in Jaipur with time to spare and were taken by taxi to the place to stay during our stay in Jaipur; the beautiful Devi Niketan. Our host is the former Head of Indian Navy, Admiral Madhavendra Singh. Devi Nikatan is his ancestral home with the Admiral tracing his Rajput ancestry to one of the Navratna of Emperor Akbar, Raja Mansingh! It should come as no surprise to anyone that several positive adjectives apply to the Admiral including handsome, educated, well-informed, friendly, sophisticated, and articulate! We had a great time here and we recommend it to everyone.

After check-in, we secured our passports in the safe conveniently placed in the room (an important point we will come to later), we cleaned ourselves of our travel grime and went to meet a friend of mine from my days in Lucknow during the late 80s. Mani Mama, whom I introduced in my previous post used to live in a large Bungalow in the heart of Lucknow along with several other family including Amar Singh and Sarika. At that time Bhai Sahib and Bhabhi (I address Amar Singh and Sarika by the honorific "Bhai Sahib" and "Bhabhi" respectively as is customary in North India) were newly married and were starting their family. I was particularly friendly with bhai sahib's younger brother who was an exercise fanatic. I was meeting them again after a gap of nearly 25 years! They were as affectionate as I remember them. It should also come as no surprise to all if I say that bhabhi  is a great cook. I know I put on at least 1 pound just because of the lunch I ate that afternoon at their place.


From there the driver took us to the Johari Bazar in the heart of Pink City, India's oldest planned city. Ostensibly Raji and Inchara were at a conference, but it seemed more like they were Whatsapp-ing with Jan images of various jewellery they were buying or recommending for Jan. I call Raji a vicarious spend-thrift! Maa was bored but I enjoyed the teeming humanity. It was colorful, loud, crowded, lively, and I could not get enough of it. After a couple of hours of shopping we went back to the hotel. 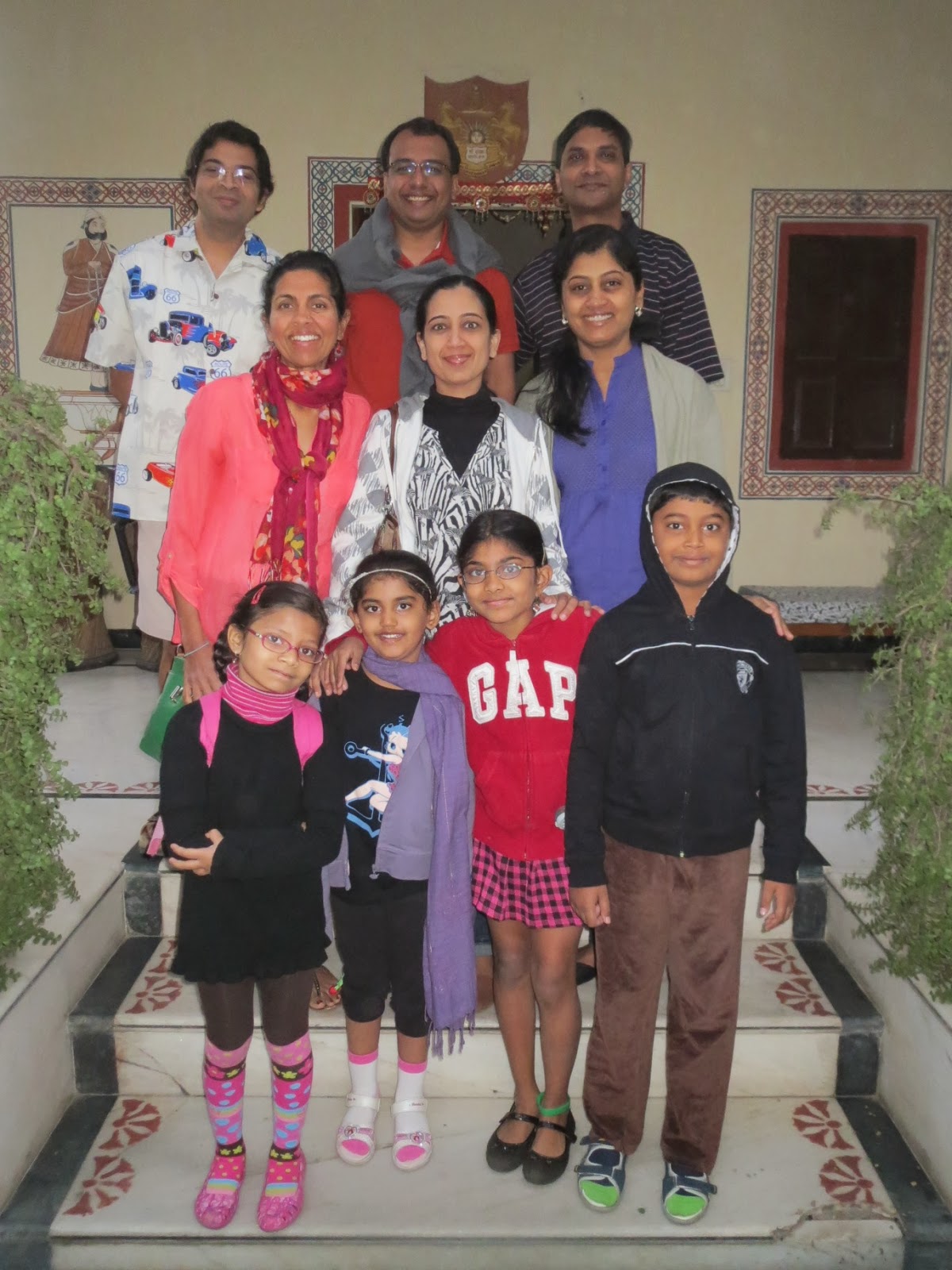 We arrived in time to see Naveen and his daughter Siri along with Harsha and his children, Sam and Vee arrive from the airport. A few minutes later Raji and Inchara also came back from their meeting. We were all finally together, the entire group would travel together for the next 6 days. The picture on the right shows the whole group, as eclectic a group as one could get; doctors, scientist, software professionals, and a lawyer. At the bidding of the kids, we had dinner at a nearby Italian place called Little Italy, where we made our plans for the following day which was Sunday the 17th.

Jan left for India on the 8th. After spending time with her family and meeting various friends, she flew to New Delhi on the 14th evening and checked into Thikana, a boutique Bed and Breakfast. B&Bs are a relatively new concept in India. A few years ago India hosted the Commonwealth Games and when it was clear there were not enough quality hotels, the New Delhi government, gave generous breaks for folks to convert their homes into B&Bs in time for the influx of visitors and tourists. Our host was one of the early adopters.

Maa, our younger daughter, and I caught a flight out of Dulles on the 13th. The 3-4 days prior to our departure was packed with action items for me. It turns out I was more vital for the successful operations of the company than I believed I was. Go figure! I helped the team with enough knowledge transfer to tide over the days I would not be in the town.

Our onward flight was uneventful with the first leg half empty. Maa and I stretched out in the 4 middle seats and had a restful flight. At Frankfurt, we had an early experience of India. At the gate, there was almost no semblance of order. This is normal in India but very strange for the folks that coined the phrase "Ordnung muss sein". Passengers were milling around the gate as if they would be left behind unless they were the first to board the plane. I watched this with amusement and waited for the traffic jam to clear. The plane left with us after all! The entertainment on Lufthansa flights leave a lot of to be desired.

In New Delhi, my friends Sandeep and Sanjay came to receive me. Considering it was past midnight, it was really very nice of them. By the time we got our bags and left the airport, it was past 2AM in the morning! I too checked in to Thikana. The rooms were spacious, the bed very comfortable, the bathrooms clean, and our hosts Atul and Sheetal very friendly and hospitable. The B&B itself is located close to a metro station and is within 30 minutes of Connaught Place, New Delhi Railway Station, and the International Airport.

After texting a few people about our safe arrival, we popped 1/2 a tablet of Melatonin and slept soundly for 6 hours and woke up at 9AM fully refreshed. Melatonin was a savior, during this trip as well as on my return back. I did not suffer a single day of jet-lag although I used it no more than 3 nights. At least for me, it reset the biological clock was nicely.

I had two items on my agenda for that day. First item was to meet my father's friends who are in some sense an adopted uncle and aunt of mine, in fact far more closer to me than anyone in my family. Mani Mama, as he is addressed by me, is a very handsome octogenarian, with a strong resemblance to Kishore Kumar. I could write an entire post about mama but not today. Lalitha Mami is a beautiful woman, young at heart and looks, a great grandmother, and a wonderful cook. They were staying with their son Raju and his wife Latha.

We made a late start and reached their house a little past noon. Latha had cooked a delicious and wonderful lunch, the details of which sadly elude recollection.We spent several hours reminiscing about the days I lived in Lucknow with them. Things were going great when Maalini accidentally dropped my phone and shattered the glass cover. I am proud to say, I did not even flinch much less lose my temper. 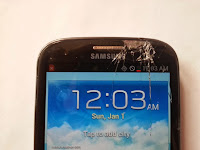 For the second item on my agenda, we left at around 4PM to go to Janakpuri to meet the parents of my best friend from high school. Although we were very dissimilar in temperament, we were quite close during the senior years at high school. My friend's father was away from home, but his mother and his niece were at home. She made tea for us and served us savories and sweets, enough to feed an army. Oh how I wish I were 15 years of age and tuck into food with verve! It was obvious aunty was very happy to see us. After meeting them, we went back to the B&B to rest and get ready for the journey next day to Rajasthan.
Posted by Raag at 11/28/2013 11:39:00 AM 0 comments

A few months back, my brother-in-law Naveen, and his wife Raji asked us, Jan and I, if we would like to vacation with them in Rajasthan, India. Raji, it seems was to attend a conference in Jaipur along with her colleague, Inchara. At the end of the conference, we, along with Raji's and Inchara's family would join them in Jaipur. Thereafter we would rent a Tempo Traveler that could seat a dozen persons along with their bags and travel and sight-see three of the famous locations, namely, Jaipur, Bikaner, and Jaisalmer. We got on-board once we found we could get cheap airline tickets. The only black cloud in all this was, Devi our older daughter, would not be with us for this trip as she was still adjusting to her freshman year in college.

After many back and forth and few more detours, we finally came up with this plan.
After these dates were decided, Jan felt that she would like to spend a few days with her parents in Bangalore. So we decided to travel to India separately. Maa and I went as planned and Jan went a few days earlier to Bangalore and met me in New Delhi on the 15th. I decided not visit my parents in Chennai as they had been with us for 3 months from early August to early November. In fact their departure to India was timed to be just a few days earlier than our own.