skip to main | skip to sidebar

Conservatives and rich folks believe that the poor are slackers and want to live of the fat of the land. They would like a flat tax where everyone pays the same percent of their salary in taxes. Even better, why not tax based on consumption. Most economist consider this regressive, since consumption accounts for most of a lower income family while forming just a small fraction for the rich.

Middle class looks with envy at the rich and want them to pay more in taxes. They also look down at the poor and hate any entitlement programs that does not target the middle class such a tax write off for sneezing. 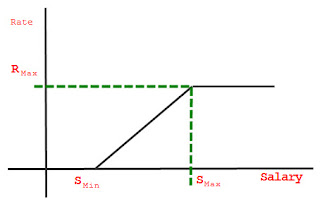 So here is my simple (or simplistic) taxation plan. It is progressive in the sense that the rich will pay a larger percentage of their salary than the poorer. The are only four variables or levers

Rmin - Minimum tax rate = 0% hence this is really not a variable.

All income would be treated equally and no special benefits would be given for investments. In short, there is absolutely no other exception. This model can be extended to both State and City taxes.

What do you think of this idea? Naive? If so, why? Don't you think every economic policy, although well intentioned, has always created distortions and finally proven the truth of of Law of Unintended Consequences?
Posted by Raag at 12/01/2012 11:51:00 PM 0 comments

I love Carnatic classical music. I took to it 20 years ago and there has been no turning back. During the early days I liked a few of the ragas like, Mohanam, Hamsadhvani, Kaanada, Kambodhi, and Kaapi. Later I learned to enjoy a whole host of other Ragams such as Shankarabharanam, Karaharapriya, Sriranjani, Khamas, and Panthu Varali to name just a few.

A large number of listeners predominantly derive pleasure from the peotry. Carnatic music is predominantly Kriti based, which means, the artist performs songs that are poems written and then set to music by the four Trinity of Carnatic Music (yes, I know what trinity means), Muthusvamy Dikshithar, Shyama Shastry, Purandara Dasa, and of course the saint Thyagaraja. Or else they choose lyrics from popular religious text. The most popular songs are almost always poems written in Telugu, Sanskrit, or Kannada. A lot of the songs are so well known that you see frequently audience requesting them by the first two words of the poem.

I am not a language bigot and I speak three quite fluently and two others that I could pick up with little effort. It is just that, these composers were deeply religious. Thyagaraja was famous for his Rama Bhakti, Shyama Shastri composed so many songs in praise of Devi. Dikshithar went on a pilgrimage around India writing peoms in praise of various deities all over the country. Purandara Dasa gave up a life of affluence to sing praise of the Lord. Since you all know my opinion on both God and religion; it would not come as a surprise when I say that these poems do not move me at all. I cannot go into ecstasy listening to how Thyagaraja chides Rama for not meeting him in the eye. Whatever dude!

And therein comes the title. I initially thought of titling this post "Tyranny of Kritis". My daughter is studying for AP Literature and from her I learned the meaning of alliteration. I immediately saw that I must change the title. I assure you I have nothing against Thyagaraja.

Coming back to my love for the music, thankfully I persevered and during this time, found myself developing a predilection for the the Alapana, Neraval, Svara Kalpana. These aspects of Carnatic Music, also known as, Manodharma, help the audience appreciate the creativeness of the artists and their ability to improvise or bring originality to a given set piece.
Posted by Raag at 12/01/2012 11:19:00 PM 0 comments

I slept like a log after the 2nd day of my Cross Country Travel culminated in severe emotional trauma. I do not remember the particulars of the following morning. I do remember taking I-80 again, not that there was any other choice in the middle of Wyoming!

I remember the day being overcast for most of the stretch. Quickly I moved into the neighboring state of Nebraska. I am sure it is a beautiful state, but I regret I remember very little of the drive other than the undulating freeway, my loneliness, the large number of trucks on the road, farms, and constant odor of manure. My only excuse is, I was young and was not a great observer.

Somewhere on the way, I picked up another hitchhiker. His story was interesting, he had no car, he worked on a farm; not sure what exactly he did; his daughter lived with her family lived several miles north of Des Moines, Iowa and he was going to see her by bumming rides along the way! Coming from California, the entire mid-west was an eye opener for me. I thought all of America was prosperous and everyone had one or more car at their disposal. And here was me, from a third world country, give a ride to a hitchhiker from the first world!

I moved over to Iowa by crossing a massive river which I later found was the Great Missouri. As a kid it used to hurt me that this river was overshadowed by the Mississippi. I took it personally since, I felt that if the cartographers had been smart and called the whole river, Missouri, then it could have been the longest river in the world with Mississippi being merely a tributary not the other way around! I hated The Nile and The Amazon and would look at the map sadly with thoughts of what might have been! Just check out this link and you will understand. The Missouri is actually longer than the Mississippi!

After dropping, my hitchhiker, I went to a Motel 6 and I found myself at a standstill. They had no rooms. The guy at the reception, another Indian, told me to try my luck at a motel nearby. When the receptionist at the other motel told me that single-room rates were more than $50 I was shocked. Here I was in the $20-$25 range and could not wrap my head around the larger number. I went back to my Indian receptionist as if he could do some magic for me! He took pity on me and told me to tell the other guy, that I was a referral from Motel 6. Well long story short, I got Motel 6 rates and went to sleep.

Very few aspects of the Day 4 stand out clearly in my mind. It was mostly about weariness and a desire to see the end of the journey. I guess it is hard to drive a stick shift without cruise control for 12 hours each day for 3 consecutive days and not be tot müde (dead tired). I was so weary that at one point I fell asleep at the wheel for what seemed only a few seconds. I remember the shock I felt when I jolted back awake. I stopped at a rest area and washed my face, rested for a short while and drove on.

I saw a sign welcoming me to Illinois followed by another massive river, The Mississipi. It turns out that Mississippi forms the eastern border of Iowa with Illinois just as Missouri forms the western border of Iowa with Nebraska. I stopped somewhere south of Chicago at a Pizza Hut. Except for a short period when I suffered from Jaundice, I have never been known to say no to food. I used to have an appetite of a rickshaw-wallah. I did not know one could be so pooped out that the sight of food could bring on gag reflex. I did the best I could and drove into Michigan.

At this point I had left behind my friend of nearly four days, I-80 and took I-94. I passed by Kalamazoo and Battle Creek and went North on I-69 towards Lansing. I was nearing the end of my journey. From Lansing, I headed east going towards East Lansing. After getting directions from students, I found out where Spartan Village was. It was late in the evening when I finally landed at PG's place. I had dinner with his friends and went to sleep, a tame ending to four amazing days in my life.
Posted by Raag at 3/08/2012 05:11:00 PM 0 comments